You don’t live long in Chesapeake Bay country before realizing that waterfowl, the Anatidae, is a big part of our identity.  My rural home county in Maryland, Talbot, is crisscrossed by tidal creeks and marshes, giving refuge to the resident, migrating, and wintering birds.  This time of year we are awakened by the sounds of the hunter’s booming guns and the honking of geese moving from field to cove, and back again when they feel it’s safe.

Every mid-November, just as the migrators are arriving, Easton hosts its famous Waterfowl Festival, doubling or trebling the population of this small town for four fun-filled days.  Anything that has even a remote connection to waterfowl is displayed, bought and sold, traded, demonstrated, eaten, and envied by the  wandering crowds.  The wildlife art including paintings, photographs, sculpture, and carvings is world class, with much of the proceeds from their sales going to waterfowl conservation.  http://www.WaterfowlFestival.org

Two of the most popular venues of the festival are the demonstration of the talented canine retrievers at a local pond and the duck and goose calling competition in the high school auditorium.  The soft mouthed dogs are magnificent as they plunge into the cold water and faithfully retrieve the waterfowl for their waiting masters.  The World Waterfowl Calling Championships are serious affairs, with both adult and child divisions.  The deceived waterfowl will not stand a chance when these artists get to their blinds.

Speaking of retrievers, let me share this anecdote about my dog Cinder, may she RIP.  She was half Siberian Husky and half Black Lab.  I can testify that she never received a lick of training from me, but she was still a retriever of sorts.  Our neighbor and accomplished hunter, Phil, was puzzled why his recently shot ducks and geese would mysteriously disappear from his porch stoop, while I was grateful to the considerate hunter who was gifting me a growing pile of un-plucked waterfowl on my stoop.  We finally caught sheepish Cinder in the act, dragging the fowl across the yard to her master’s doorstep.  It’s in their blood.

Identification of the 8 species of swans and 15 species of geese is straight forward.  We all likely learned about these birds from childhood picture books and nursery rhymes.  Most of these are monogamous and many bond for life.  It’s with the 57 species of the more diverse and colorful ducks where the ID’s become more taxing and the lifestyles more risque with multiple sexual partners, brood parasitism, hybridization, and bizarre reproductive anatomy.  Check out my posting of 2/10/2018, a book review of “The Evolution of Beauty” by Prum, for more details.

The ubiquitous Mallard is probably the most recognized and common duck worldwide and the parent species of most of the domestic “barnyard” ducks.  But despite its rather striking male attire it just doesn’t get any respect.  Some have attempted to remedy this by putting the emphasis on the second syllable of “mallard” and add a slight French accent for good measure.  It hasn’t worked.  The overexposed Mallard is one of the herbivorous dabbling ducks that feed on the water’s surface or on anything within reach on the bottom.  That accounts for the common “bottoms-up” shots of these ducks. 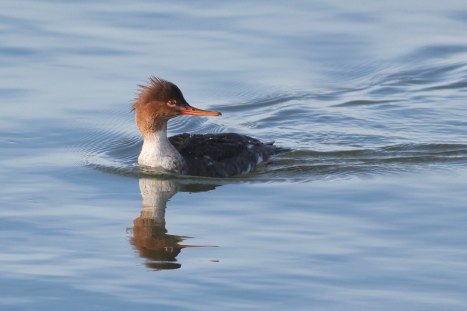 Diving ducks such as scoters, eiders, and mergansers are carnivores, feeding on fish, mollusks, and aquatic invertebrates.  Observing and photographing them is a challenge.  Just when you get them in your field-of-view they dive.  While underwater you guess where they’ll resurface and get all your exposure factors just right for the perfect shot, but are more often wrong than right.  Sometimes I think they are playing games with us photographers.  Unlike the vocal dabblers, the divers are generally silent. 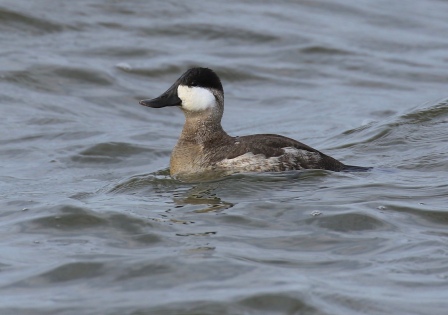 Yesterday I noticed some diving ducks from the Knapp’s Narrows drawbridge, on my way to Tilghman Island.  A quick U-turn and stealthy approach while hiding behind a concrete embankment allowed my all-time closest photos of the Long-tailed Duck.  This gorgeous diving duck, formerly known as the “Oldsquaw”, is a wintertime visitor from the Arctic.  It’s unique in that it goes through 3 different plumages each year.

The best place to see Snow Geese around here requires a short drive east to Bombay Hook NWR on Delaware Bay.  Earlier this week that drive did not disappoint.  At some distance across the marsh you could make out a long white line caused by uncountable thousands of these rafting geese.  Every five minutes or so, apparently spooked by an overflying harrier or eagle, the flock would rise up like a giant white amoeba, hover over the swamp, and then gently settle back again to the surface.

The Anatidae family is part of the larger Anseriformes order that also includes the Screamers of South America.  People that know these things point out that all the Anseriforme tribes of waterfowl favor the southern hemisphere with many of the more primitive species found solely south of the equator, whereas none of our northern waterfowl are exclusive to the northern hemisphere.  All this suggests that our swans, geese, and ducks likely arose from a common primitive ancestor in the south, possibly from Australia. 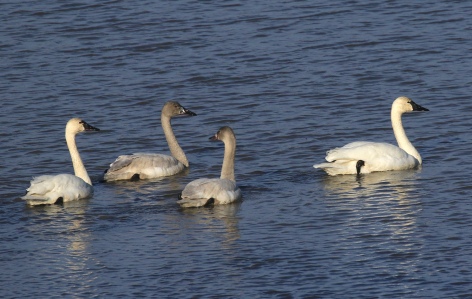 Each fall and winter I put on an extra layer of down and take a hot coffee to some prime waterfront location in hopes of seeing and photographing the waterfowl.  The fact that many of them are just here for a few short cold months makes me anxious to see them before I escape to Florida.  They are clearly much hardier than me since many will never venture much further south  than the Chesapeake before returning again to breed on the remote tundra.

Where did the year go?  As we age each year accounts for a progressively smaller portion of our lifetime.  For me it was 1.5% this year.  Maybe that explains the racing clock.  As my life list approaches 1000 I have less and less time to photograph those other 9000 birds.  It’ll never happen.  Life lesson:  just treasure each year and photo as its own gift.

Most of my birding this year was domestic, with frequent visits to favorite local haunts.  Panama, this November, was the exception and supplied me with countless photo-ops of new and colorful birds.  I vowed, however, to not let those avian superstars dominant this post. 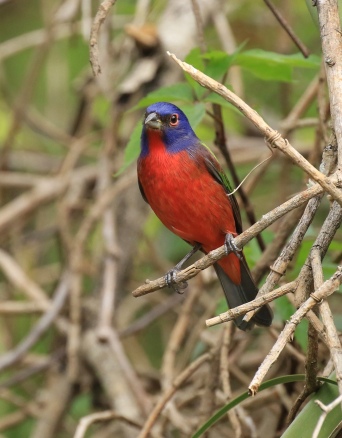 In the course of the year I take 20 to 30,000 bird photos, quickly deleting over 95% of them.  That still leaves 1000 “keepers” that are cataloged by family and stored for eternity or until my hard drive crashes.  An initial run through those yielded about 50 or 60 finalists.  The hard part is trimming that list down to 25 for this year-end post.  I hope you enjoy the result.

Each photo has a back story.  That “cover shot” of the flycatcher from Panama is not really an exotic bird, but just struck my fancy with the ruffled feathers-look and interesting composition.

Each winter I try to visit the Ocean City, Maryland jetties to see what the wind and surf are blowing shoreward.  It is usually a brisk but rewarding outing.  Generally my shots from there show the seabirds swimming away, probably spooked by the telephoto lens and large lumbering birder.  The resultant rump shots are not great, but this year I hunkered low among the rocks and got some shots with them coming in for a closer look at the crazy birder. 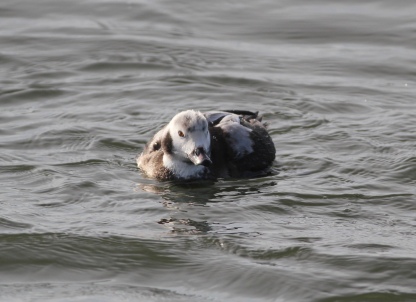 September, on Prince Edward Island, Canada, yielded great landscape shots but was a little wanting for avian photos.  I was struggling at dawn with some eiders in the surf, but they were hopelessly backlit by the rising sun.  Two crows were mocking my efforts from behind.  Finally, turning around to shoo them away, I noticed that the light was just perfect for a crow shot.  Not great birds, but a pleasing, well-exposed photo resulted; and they seemed to enjoy their 15 seconds of fame.

It’s extravagant to include two shots of any birds, but the colorful Eastern Meadowlark is a favorite of mine, often striking a photogenic pose.  My best shots of them are from the Dinner Ranch, a beautiful wide-open space in south central Florida, far from the maddening crowd.

Let me add some ordinary yard birds to the posting.  The mockingbirds are the yard’s apparatchiks par excellence, one patrolling the south half and his comrade working the north side. They’ll chase away anything larger and threatening, but seem to temporarily meet their match when the kingbirds arrive each spring.  The wren gets the prize for best yard vocalist, while the cardinals add local color. 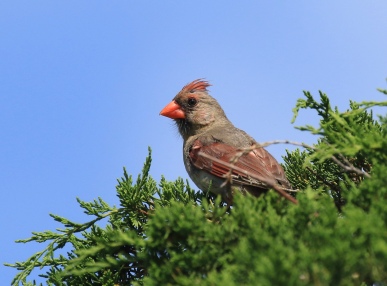 What bird portfolio is complete without some flying shots?  The swans and eagle were active during my recent trip to Blackwater NWR in Maryland, and the gawky stork, of course, graced the airways of Florida. 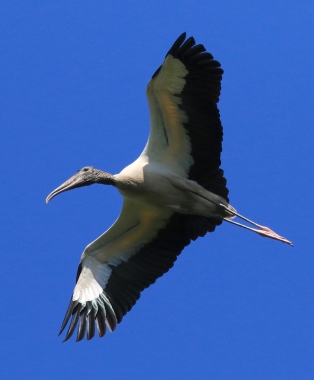 The birds of prey on the Floridian fenceposts strike two quite opposite poses.  The caracara is confident of his appearance and proud of his status in the avian hierarchy, whereas the vulture hangs his head in shame.  Actually both humbly survive on roadkill.

Feeding shots always add some interest.  The gull and unlucky crab were seen on Nantucket, while the Anhinga and unfortunate sunfish were residents of a south Florida marsh. 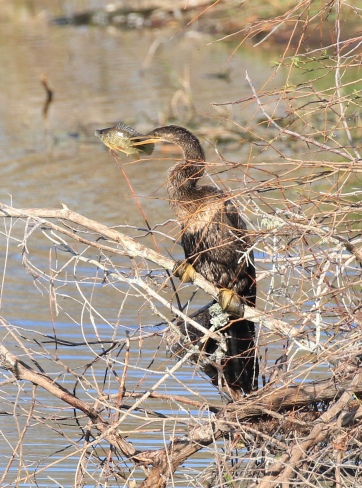 I know a bird photographer worth his salt is not suppose to post posed shots, but I offer these anyway, for better or worse.  Isn’t it fascinating how a bird is so often found in a setting similar to its own coloring?  The pleasing background blur or bokeh is sought by photographers for these portrait shots and results from using a wide open aperture giving a narrow depth-of-field in focus.

I’ve included a few shots because they remind me of key events of 2018, like the fledgling of the nuthatches from Mary & Gene’s feeder, or finally finding and photographing the endangered Red-cockaded Woodpecker with Andy at Babcock-Webb Preserve in Florida. There was the fallout of migrating warblers this spring at Naples Park, and, after years of trying, I finally got a decent photo of a Brown Creeper from the Blackwater NWR.

And lastly, let me add a few more colorful birds from Panama.  That trip with these new tropical life birds, as well as the heat and humidity of Central America are still vivid in my mind.  I’m reminded of it daily as I scratch the persistent chiggers, so loathe to finally leave me alone.  Onward to 2019. 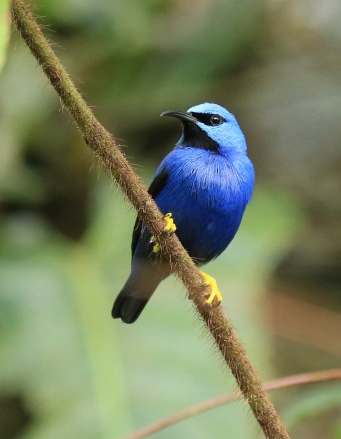 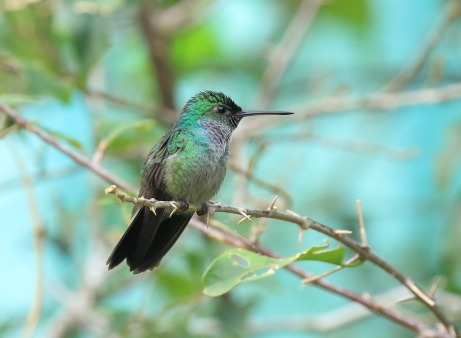