Since spring there has been a sad sac Canada Goose waddling around the yard, dragging an injured right wing behind.  I plead guilty to chasing it away from the pool deck and dock where it likes to deposit its fruits of digestion.  When chased it obviously can’t fly away with its friends but instead does a fast waddle to the riverbank and tumbles over the rip rap to the safety of the water.  It seems to have no problem swimming.  My initial annoyance with the goose has slowly changed to toleration and even a little respect as it strives to survive.

I don’t know the story of the “accident”, or even if this is a resident or migrating goose as it was first seen before the spring migration when both types of geese were here.  Most likely it was wounded during hunting season by a poorly aimed shotgun, but that is all conjecture.  When I first noticed the injured fowl I did not give it much of a chance for survival with its dragging wing and the abundance of Red Fox, Bald Eagles, Vultures, and Great Horned Owls in the neighborhood. 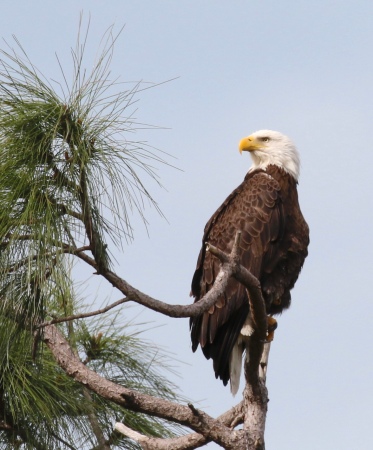 But in May and June it was still here and even seemed to participate in the care of several broods of goslings hatched along the cove.  These, however, have matured and moved on.  The wounded bird is now usually seen alone, feeding on the lawn.  Who knows what awaits the bird this autumn and winter?

Being a radiologist I would love to x-ray this bird’s wing and diagnose the exact problem.  Which bone is fractured or is it just dislocated?  Is there evidence of early healing?  And what is the prognosis for future flight?

The avian wing, the equivalent of our arm, is a magnificent structure formed for maximum strength and efficiency, while maintaining lightness for flight.  The upper arm or humerus bone is relatively shorter and thicker than ours and bears the major torque of the flapping wing.  The more distal paired radius and ulna are the equivalent of the human forearm, and like ours can be rotated or twisted.  This allows fine tuning of the wing attitude during flight.  Small bumps along the trailing edge of the ulna are the attachment sites of the secondary feathers.

Rock Dove Left Wing, from “Manual of Ornithology” by Proctor and Lynch.

Its in the wrist and hand bone where one sees the most deviation from the human skeleton.  The bird has two small carpal bones while we have eight.  They have three fused metacarpals to our five.  Distally they have three digits or fingers while most of us have five.

The pectoral girdle or shoulder of the bird is also very different from ours.  Just think of function.  The demands of flight require a  stout bracing for the large flight muscles and a strong attachment of wing to body, whereas the human shoulder is designed for flexibility and finer movements.  The bird’s oversized sternum and coracoid are obvious flight adaptations.  The “wishbone” or furcula is felt to be a flexible bone the bends downward with each wing beat and then springs upwards, aiding the flapping motion of flight. 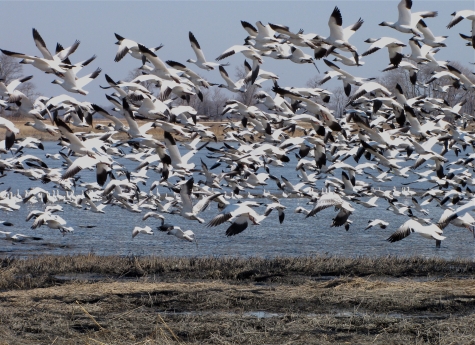 Most bird bones are hollow and highly pneumatized with air sacs that actually communicate with the respiratory system.  Internal struts give the light, hollow bones added strength, but not enough to withstand the trauma of the shotgun pellets.

Getting back to our injured goose, I’ve decided not to intervene.  I’m not going to sneak the bird into the hospital’s x-ray department at night for a wing film, or try to splint the ailing wing, nor will I consult the humane society.  Instead my goose’s fate will be up to nature, its survival skills, and/or some higher power. I must admit that I admire its dogged fight for life and am rooting for it as it faces the coming colder months.  You might even catch me scattering some corn when no one is looking.  We’ll see. 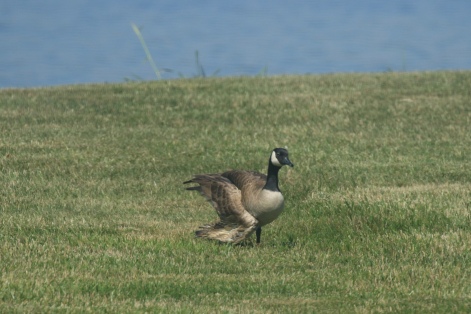 6 thoughts on “Bird Bones and the Injured Goose”