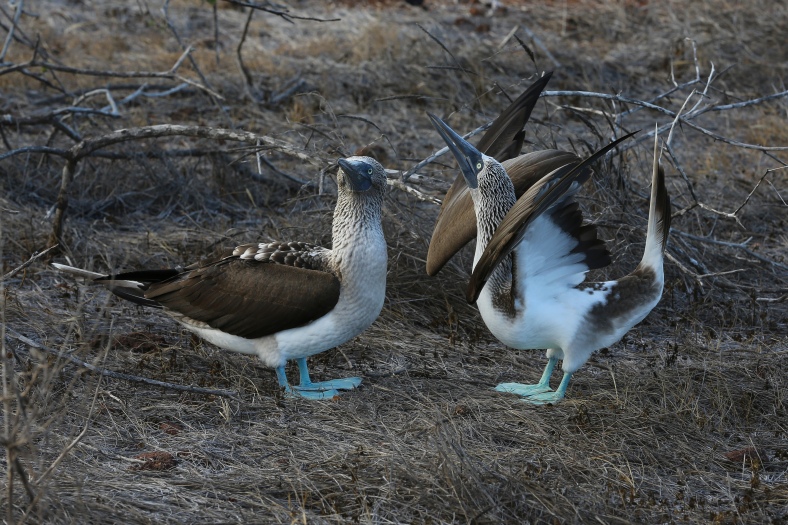 August must be a slow month for birding since my mind has turned to the fascinating topic of bird excretions.  It may also be because of the daily reminder found on my dock.  Early in the season the dock was guano-free, perhaps due to the policing of the nearby nesting Osprey which mobbed any intruding gull.  But now the Laughing, Ring-billed, and Herring Gulls are back big time and the Osprey all seem to have given up the dock patrol, perhaps preoccupied with planning their upcoming long migration to the south.

Royal, Least, and Forster’s Terns, as well as an occasional Double-crested Cormorant are now all contributing to the mess.  The rotating gull sweep and wind socks help some, but I sense the Laughing Gulls are defecating on my poor plastic owl with vocal hilarity. 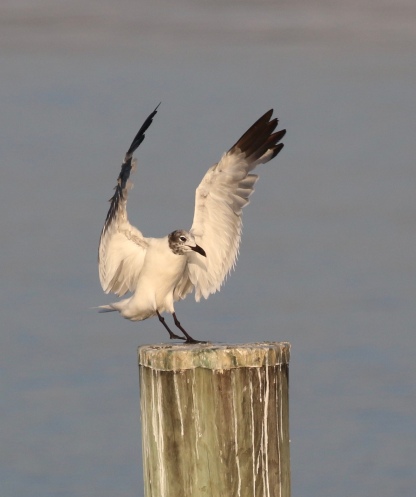 Seriously, guano is much more interesting than you’d think.  It represents millions of years of evolutionary success and has even caused wars among us enterprising and competitive humans.

All animals require dietary protein (composed of nitrogen-containing amino acids) for maintenance of body structure and function.  The metabolic breakdown products of proteins are a toxic nitrogenous waste that must not be allowed to accumulate.

In humans and other mammals these wastes are excreted in the urine as urea, dissolved in large amounts of flushing water.  First dinosaurs, and later birds, have evolved kidneys that have the ability to concentrate these wastes as uric acid, requiring only 1/20th the amount of water needed by us humans.  It’s these uric acid crystals that give guano its distinct white color that daily spots my dock. 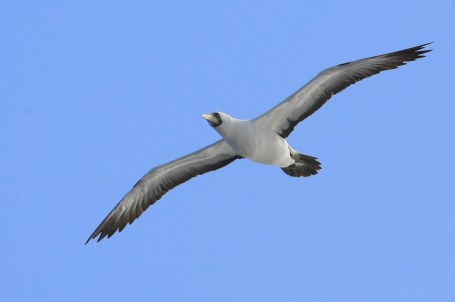 When various berries are ripe the spots are a slightly more pleasing pink, red, or blue, reflecting the diets of my avian friends.  If you examine the guano closely you’ll see small piles of tiny bone and shell fragments, the remains of fish and blue crabs finely chopped in the bird’s gizzard.  If so inclined I could monitor the contents of the birds’ excretions and publish a significant research paper.  I’m not so inclined.

The word “guano” is derived from “huanu”, coined by the indigenous Quechuan people of the Andes and South American highlands to describe bird dung.  For at least 1500 years these people recognized the fertilizing power of guano, later shown to be due to its high concentrations of nitrogen, phosphates, and potassium.  Alexander von Humboldt introduced guano to Europeans in 1802, forever changing their desire for this valuable fertilizer.  It allowed much more intensive farming with significantly higher yields per acre.

While some Americans headed west to stake their gold-mining claims in California, others headed south to the guano islands to make their fortune.  The U.S. Guano Island Act of 1856 gave exclusive rights of guano deposits to citizens staking their claims on any unclaimed island.  Some of these small islands in the Caribbean and off the west coast of South America had guano deposits 50 meters deep.  100,000 indentured servants from China came to the New World in the 19th century, specifically to become guano harvesters.  The “guano rush” was on.  Conservation laws were enacted to protect the valuable islands and the guano-producing birds. 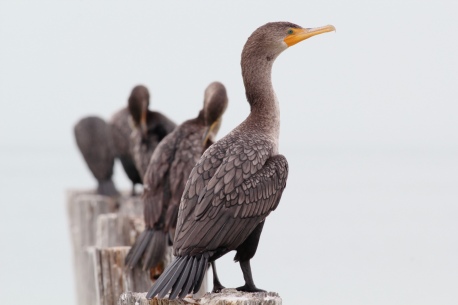 The “best” guano is found along the dry western coast of South America.  The control of this guano paid a key role in the Chincha Island War of 1864-6, fought by Spain against an alliance of Chile and Peru.  Peru and Chile later fought each other in 1879 for this same guano.  Some people speculate that it may have been guano from Mexico, infested with the Phytophthora infestans mold, that cause the severe potato blight and famine in Ireland in the mid 19th century.

Things began to quiet down in 1909 when the process of industrial nitrogen fixation became the primary way to produce ammonia-based fertilizers.  To this day, however, guano is still used as an effective natural fertilizer, and is especially cherished by organic farmers and consumers.

Knowledge begets toleration.  Tomorrow as I hose off the dock I’ll not be mumbling about all the b.s., but rather pondering the structures of urea and uric acid and the eons that evolved the differing kidneys that excrete them.  And how enterprising man found a use for the foul of the fowl, and even fought wars over the control of it.  I’ll also consider planning a trip to South America and the islands, and maybe even see a Guanay Cormorant, Peruvian Pelican, or a Peruvian Booby, the most prolific guano producers of all.

There were calls of “Glossy Ibis flying right to left”, “Bank Swallows on the bank”, “nesting Black-necked Stilts on the mudflat”, and “beware the large looming crane ahead”.  The later sighting was not of the avian variety, but rather a gigantic towering long-necked machine.  We birders were visiting Poplar Island, an active island construction and restoration site on the Chesapeake Bay.

I’ve previously described the disappearing islands of the bay, succumbing to rising water, sinking land, and erosion.  This has been going on for eons, but man is now fighting back on a massive scale.  The Poplar Island Restoration is an attempt to recreate this island in a sustainable fashion using dredge material from the shipping channel.  Hopefully the resurrected historic site will become a beacon to naturalists and local flora and fauna, as well as an environmental laboratory for future projects.  It is a work in progress but has already achieved much of these goals.

William Claiborne surveyed Sharp’s Island, now gone, and Popeley’s Island, later renamed Poplar’s Island, in 1627.  Early English settlements had mixed results with an Indian massacre occurring in1637.  The British used the islands as a base when they invaded the Chesapeake Bay in the War of 1812.  In the mid 19th century Poplar Island, along with the nearby Jefferson and Coaches Islands, were over 1100 acres in size.  In 1847 an entrepreneur sought riches in the trade of black cat fur, populating the island with hoards of black cats.  Watermen delivered fish daily to support the herd.  All was going well until the winter when the bay froze over and the cats all escaped over the ice, their fur intact.

By the early 20th century there were 100 residents on the island living on several farms.  A school, church, post office, and sawmill graced the small community.  In the 1930’s and 40’s the democratic party built a hunting and fishing retreat center on the adjacent Jefferson Island, visited by presidents FDR and Truman.   But by now the retreating shores were evident and the island’s fate unsure.  You can read “Poplar Island, My Memories as a Boy” by Peter K. Bailey to appreciate the life of the islanders in this era.  “The Disappearing Islands of the Chesapeake” by William B. Cronin describes a similar process throughout the bay and contains fascinating pictures of the shrinking land.

By the 1990’s the island was only 4 acres of several small islets, barely breaking the surface.  Someone, looking for a site to deposit dredged material from the shipping channel, had the bright idea to restore and recreate Poplar Island.  This was not a simple task, but rather a complicated bureaucratic, engineering, and environmental feat attempting to restore habitat without damaging existing wildlife.  It became a joint effort of the Army Corp of Engineers, Maryland Department of Transportation, and Maryland Environmental Services (MES).

The first step was to construct containment dikes of rock and sand to shape the various habitats of the restored island.  The goal was to create marshy wetlands as well as drier uplands.  Initially the plan was to restore the 1847 footprint, but given the success of the project, the target size was increased to 1715 acres.

I’ve visited the island three times over the last several years and marvel at the progression.  MES proudly sponsors a free guided tour of the site on a seaworthy boat and air-conditioned bus.  Visit their website for more info; http://www.poplarislandrestoration.com.  My trips were sponsored by birding clubs and the itinerary was tailored for birders.  Bring your binos, scopes, bug spray, and sunscreen.  Others may visit to inspect other fauna and flora, or even the engineering feat itself.  There are several quonset huts along the dirt roads that describe the entire endeavor.

Ebird now list 240 species of birds seen on the new Poplar Island.  There are 34 nesting species reported including the American Oystercatcher, Glossy Ibis, Snowy Egret, Least and Common Terns, and Black-necked Stilts.  The island is popular with waterfowl in the colder months.  On one recent winter day a total of 15,000 birds were counted.  Other fauna are also returning, with Diamond Back Terrapins thriving.  Deer frequently swim over from the mainland to join in the party.

I’m attempting to picture my trip to Poplar Island 25 years from now.  I’ll be 92 and probably still have my same binoculars, (they’re guaranteed for life).  The restoration will be complete.  The cranes, earth movers, and bulldozers will all be long gone.  The island will be crisscrossed with a few hiking/biking trails, I hope, with some strategically positioned benches and viewing stands. There may even be a small harbor and slips for docking a few pleasure craft. I’ll limp from the wetlands to the uplands to once again check out the birds.  I will have a smile on my face as I survey Poplar Island one last time, the gem of the Chesapeake, a plan wonderfully conceived and executed by many folks for the lasting enjoyment of friends and fowl for generations to come.