2016 has been strange in many ways.  Add one more example–it’s the first time in nearly 70 years that the full moon and solstice have fallen on the same day, June 20.  Algonquin Indians called this rarity a “Strawberry Moon” since it occurred at the height of the strawberry harvest.  The solstice (from Latin sol, meaning sun and sistere, meaning to stand still) is the day in the earth’s orbit when the 23 degree tilt and the northern hemisphere are directly toward the sun, the sun reaches its maximum elevation in the sky, and daylight lasts the longest.  In other words, it’s all downhill from here.

To celebrate, I went birding.  June birding is like June Christmas shopping–there are no crowds but the pickings are rather slim.  Gone is the phrenetic excitement of spring migration when you feel you’ll miss something if you’re not out there everyday.  Instead you have the quieter breeding, house-keeping, and chick-rearing of the birds that have chosen to live and work in your neighborhood, fostering a special attachment to these “locals”.

Summer birding is all about moisture.  As a northerner I first looked for a job in the south 35 years ago.  During an interview in Charleston SC I commented on the humidity.  “If you want to live down here, young man, you’ll just have to get use to feeling sticky.”  So I took a job a little further north on the Eastern Shore of Maryland.  Combine sweat, bug spray, and suntan lotion with standing water from a rainy spring and you have sticky birding, even here in the shallow south. 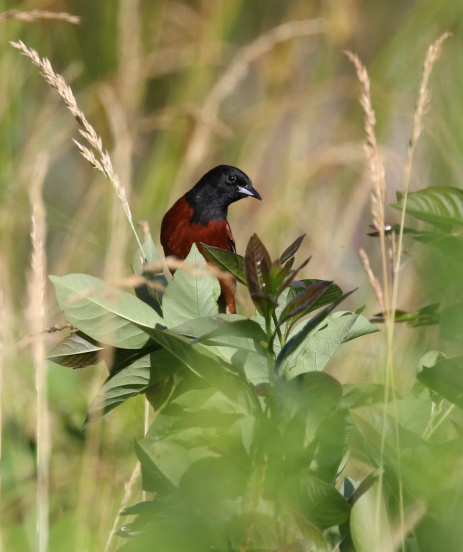 Along our tidewater creek on the Chesapeake we were debating the other evening as to which bird was contributing the most decibels to the summertime din of birdsong.  It was a draw between the nearly constant screeching of the Osprey, the piercing trill of the Red-winged Blackbird, and the extensive repertoire of the the Northern Mockingbird.  The Mocker probably wins the prize for duration as he continues the concert long after sunset.

The photos in this post were all taken this week at the Blackwater NWR in Dorchester County, Maryland, a few miles south of here.  There was nothing unusual seen but the day offered a chance to work on photography techniques.  This site is my most reliable location to find the gorgeous Red-headed Woodpecker, a bird that alluded my camera lens for years.  I was the only birder there, the horse flies and mosquitoes were held at bay by the strong NW winds which came in following the priors night’s strong storms, and the daylight was long–the longest of the year. 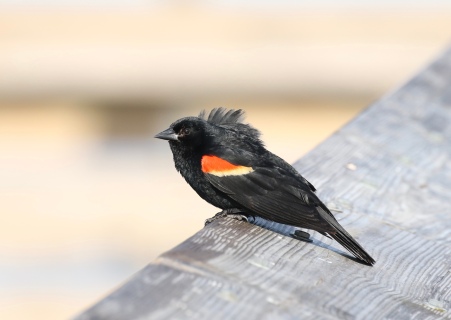 We were having a glass of wine on the porch at sunset this week when two Mockers landed on the lawn right in front of us and began literally rolling over each other in the grass.  I’ve seen birds mate standing up, sitting, swimming, and even while flying, but have never seen this rolling caper.  It became even stranger when the third bird flew in.  My literary spouse put it all into perspective when she reminded me of Oscar Wilde’s famous quote, “I have no objections to anyone’s sex life as long as they don’t practice it in the street and frighten the horses.”

The story of the increasing numbers of non-migrating, resident Canada Geese is more interesting than just “bird slothfulness”, and may be an example of the unintended consequences of human intervention, bird adaptation, and evolution in action.  These year-round birds also generate strong human emotions and responses, similar to when a house guest overstays their welcome.

My first childhood memory of Canada Geese was when my father pointed out the honking V’s, high overhead as we made our cottage ready for winter in Upstate New York.  When I moved to the Chesapeake 33 years ago they took center stage each fall, and all exited stage left each spring, leaving us with fond memories and anxious for their autumn return.  Back then they were very welcome, but things have started to change.  The Branta canadensis PR department must re-examine their new behavior before it’s too late.

There are about 5 or 6 million Canada Geese in North America with the resident non-migratory population now greater than 50% of the total.  In 1900 however, Branta canadensis was in serious jeopardy, mainly from hunting pressures. By 1950 the “Giant” subspecies, occidentals, was thought to be extinct.  Luckily a small surviving group was located and allowed to breed in captivity, and were eventually released back to nature, but now as non-migrating birds.  Interbreeding with other subspecies led in part to this growing population of geese that no longer heeds the call of the north each spring.

And how can you blame them?  1500 miles is a long way to fly if you don’t need to.  When you get there, tired and hungry, you must immediately mate, build your nest, and fight off predators, only to make the return flight south in 6 months.  The resident geese however can enjoy a year-long stable climate and breeding conditions, beautiful grassy lawns for feeding and ponds for swimming, few predators, and only have to take short, low-altitude flights.  They’ve boldly adapted to lawn mowers, dogs, picnickers, golfers–no problem for them.

A picnic in our front yard.

The problem is for humans.  Denuded lawns, goose droppings on the putting surface and elsewhere, polluted ponds and pools, health concerns, and airplane collisions are some of the issues.  The birds are protected by the Migratory Bird Act but some efforts to reduce the population have been tried without significant success.  Many states have an early hunting season, before the migrating geese arrive.  Nest and egg destruction, harassment, habitat management, etc. have all been tried to little avail.

It interesting to note that while the migratory geese are only breeding after they arrive in Canada, the resident geese breed down here–they don’t interbreed and their gene pools do not mix.  I suspect someday we will begin to see morphologic differences such as smaller migratory birds with stronger flight muscles, as well as genetic differences when mutations occur and are passed on only along the isolated lines.  I think I can already detect the fatter and bolder resident birds when the flocks mix here in the winter.  Someday, in perhaps several million years, we’ll see a distinct separation of two species. 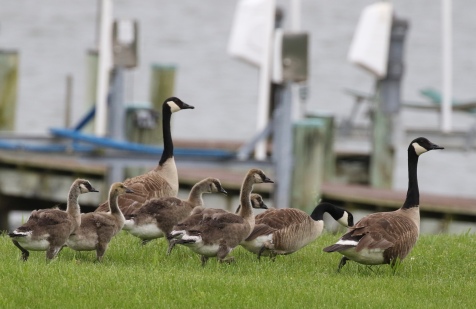 Teen age brood. Where are their headphones, cell phones, and tattoos?

This spring we had two families of resident Canada Geese raised along our shoreline.  I must admit it was enjoyable watching the growing families parading across the lawn each evening.  One day I found several small chicks had entered our pool but could not climb out–the parents were nearby honking loud instructions but were unable to save their young.  Here was my chance to cull the population–but I just could not do it.  I spent a long time catching the downy youngsters in my leaf net–those little buggers can really swim and dive even if that can’t fly.  I finally released them to their concerned and squawking parents, with nary a thank you I must add.  I guess I’ll just leave the culling to someone else.

The last of April and early May were remarkable for the cold, wet weather here in Maryland and throughout the Mid-Atlantic.  I heard we had 14 straight days of measurable rain and the thermometer was clearly forgetting that the spring equinox was six weeks ago.  As we pulled into our rural road, returning from a hot supper out, there was a good-sized flock of Purple Martins, maybe 25 or 30, blocking our way.  As I slowed down surprisingly only a few flew away and even those birds quickly landed a short distance further down the road as if to claim it for themselves.  I ran an obstacle course through them trying hard to straddle as many as possible.  What was going on?  These were not the usual energetic, swooping, and vocal swallows one usually sees each spring.  The next morning the martins were still on the road, but now there were several squashed bodies of those that had refused to yield to traffic.  This went on for several days and the body count mounted until the survivors finally disappeared. 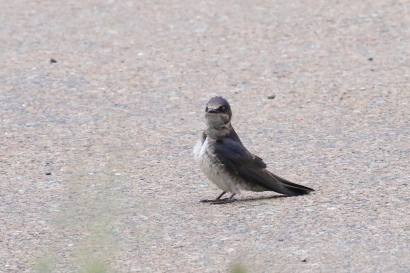 About this same time I was at a party where friends of mine recounted another episode of strange martin behavior occurring about the same time in the cold and drizzle.  This couple are bird lovers and astute observers of the flora and fauna in their yard. They noticed a martin with unusually droopy wings perched on the porch of their Purple Martin house.  He flew away when they investigated with a ladder but one of the apartments was jammed with five other stuporous martins.  The entry to another apartment was blocked by a dead bird, and when he was removed another five birds flew out the now open door.  What’s going on?

As you probably know Purple Martins are long distance migrants. The older scouts first arrive in the Chesapeake region in the second half of March, seeking their prior year’s nesting site.  The younger birds make the long trip from South America up to four weeks later.  The martins are the largest New World swallows and the only swallows displaying sexual dimorphism–the sexes look different. The eastern subspecies has the unusual trait of almost entirely depending upon man-made cavities for nesting.  Hundreds, perhaps thousands of years ago Native Americans in the east started hanging hollowed-out gourds to attract the sociable martins.  European settlers noticed this and expanded the practice which we continue today.  After thousands of generations of birds using these man-made nesting sites the eastern martins have essentially abandoned the use of natural cavities.

The concept of long distant and massive bird migrations has not always been known.  This makes sense since until the end of the 15th century we weren’t even aware of the distant continents themselves.  There was a general idea that the disappearing fall birds were hibernating somewhere, just like the frogs, turtles, and some mammals.  I’ve read old accounts of torpid spring martins that were assumed to be waking up from their winter’s sleep and wonder if they were describing the same behavior of our martins last month. 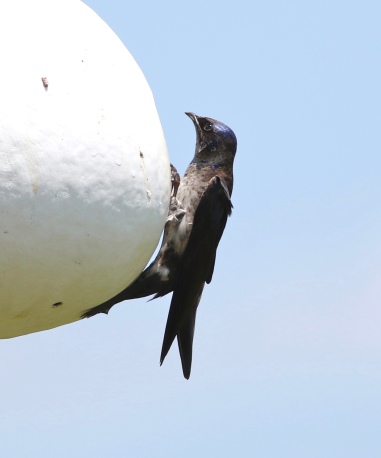 So here’s my theory of what’s going on with the martins.  They are tough birds but after a two thousand mile migration their body weight is significantly reduced and the birds are vulnerable.  The ill-timed cold snap and rains greeted them in their already weakened state making it difficult to fly, or even avoid an oncoming car.  Martins usually forage during flight, but if they are too weak to fly hunger will compound their plight.  Possibly the flying insects they feed on were also in short supply due to the inclement weather.  I’ll bet they were huddled in the apartment and on the dark road in a last desperate search for warmth.  In the open they were clearly easy prey for predator hawks as well as the squashing cars.

Let me know if you’ve noticed similar behavior or if you have any additional thoughts.  It may well be a tough breeding year or two for the martins, at least in our neck of the woods.