When bit by the birding bug your behavior becomes bizarre, according to belittling bystanders.  Be that as it may.  One of our traits is the need to bird constantly.  As you know, birding can be accomplished at many levels of intensity.  There’s the full court press of binoculars, scopes, telephoto lenses, guidebooks, and computers on the one extreme, and the casual noting of birdsong and flyovers as you live the rest of your life, on the other. 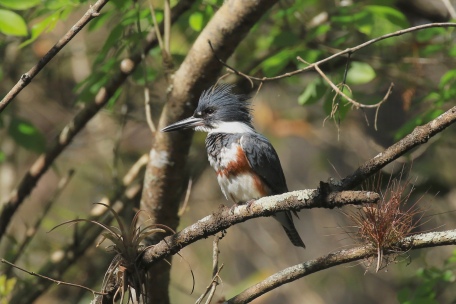 I’ve birded while sailing (see a prior posting), during a pelagic expedition off the coast of California (another prior posting), and now while kayaking.  I can testify that the latter is the most rewarding aqueous birding for me.  A kayak allows a stealthy approach to the quarry, the bird almost accepting you as part of the water.  There’s no flapping sail, noisy engine, or chumming (either intentional or due to sea-sickness).  As opposed to a tippy canoe, with a kayak you sit right down in the water, at eye level with the surface, giving a pleasing angle for viewing or photography.

A couple practical hints:  wear gloves to avoid blisters, plan on getting wet (you might want to leave your expensive photography equipment on dry land), and if in a dual kayak, take the back seat (you get to steer, the other person can’t whack you with the paddle, and you can take a clandestine break while your partner keeps paddling).  Also, check the boat for varmints.  I keep my kayak turned over on the bank and wasn’t aware I had a large black snake onboard until well underway.  So much for the birding that day.

I’ve birded from a kayak in the mangrove swamps of southwest Florida and near home on tributaries of the Chesapeake Bay.  The Florida excursion was with six people in three boats.  The leading kayak contained the alpha males whose quest was to traverse the swamp and inland waterway and make it to the Gulf of Mexico and unknown distant shores as quickly as possible.  The second boat was made up of young, physically fit bones that could paddle all day.  They weren’t really interested in birds.  The last boat was mine, with two sixty something year old birders trying to keep up and see some interesting birds.  I was in the stern seat.

A mangrove tunnel, from the back seat

The mangrove swamps south of Naples bordering the gulf coast are an extensive tropical tidal ecosystem covering 2700 square kilometers and sometimes extending up to 30 miles inland.  They are the final watershed of the Everglades and Great Cypress Swamp.  The mangrove are crisscrossed by a myriad of navigable tunnels and a few wider waterways.  Its very easy to get turned around and lost if you don’t keep up with your leader, assuming he knows where he’s going.  A handheld GPS is invaluable.

We saw no rarities, but that did not detract from the adventure.  A Bald Eagle perched high on a tall pine bade us adieu as we entered the swamp.  The most common birds were egrets, herons, and ibises, with an occasional kingfisher.  I have yet to see a Mangrove Cuckoo.  We packed subs from Subway and passed the perfect sandy island on the way in, with plans to stop for lunch there on the return trip.  But time and tides wait for no man and we settled for lunch standing on this submerged island in 12 inches of water a few hours later.  It was still welcome food and a chance to stretch. 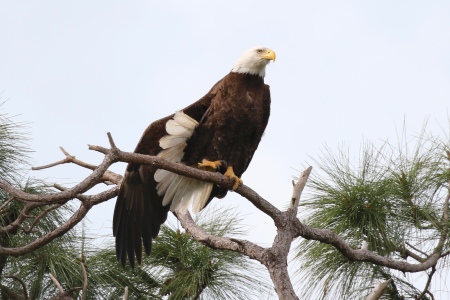 There are no mangroves in the Chesapeake Bay.  My Eastern Shore is characterized by uncountable tidal creeks, ideal for kayaking.  These are not your typical babbling brooks one thinks of as a “creek”, but rather wide, sometimes as wide as a half mile, of irregular fingers of the vast shallow estuary.  Think oysters, crabs, bluefish and rock bass, as well as sailing and kayaking. 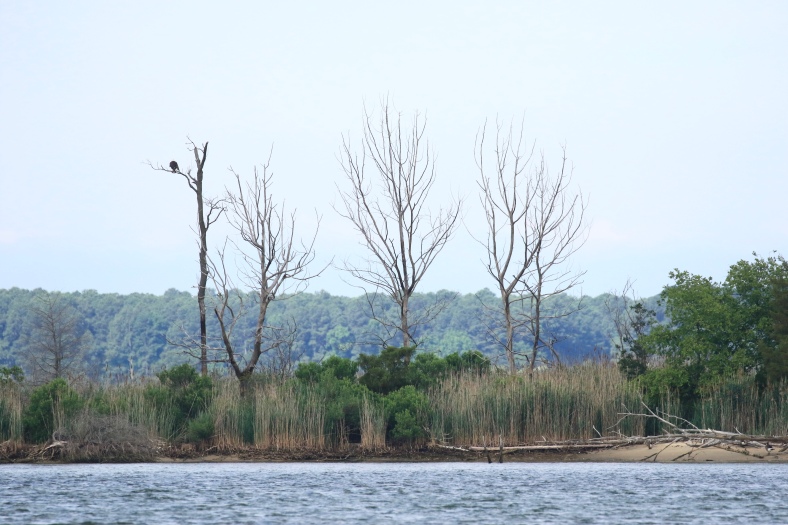 My local destination is usually Willey’s Island, one of the bay’s many disappearing islands.  People tell me that at one time there was an active farm on the property.  I have watched it shrink for 20 years till now its just several sand spits, and small surviving uplands with its shore littered by fallen trees.  More succumb with each storm.  There was a single majestic pine on one end of the island, a favorite perch of a local Bald Eagle.  It now has died, has wet feet, and will topple over soon.

The rising sea level is not the only explanation for the disappearing islands.  I’m told that the land itself is actually sinking due to deep geologic events.  These factors together have made these silt and clay islands vulnerable to shoreline erosion.  There are no stabilizing natural rocky shores in the Chesapeake Bay.

Toppled trees along the shoreline

My recent kayak trip to the island showed that a Cormorant had taken over my dying Eagle tree.  Chattering Least Terns are more numerous than Forster’s this year, and I wonder where all the sea gulls have gone.  Most years we’re overrun with Ring-billed and Laughing Gulls by now, but this year, nary a one.  My clean dock is evidence of this.  The Osprey continue to increase in number.  There is a housing crisis for them with now almost every channel marker sporting a nest, even the triangular red markers with the pointed top. 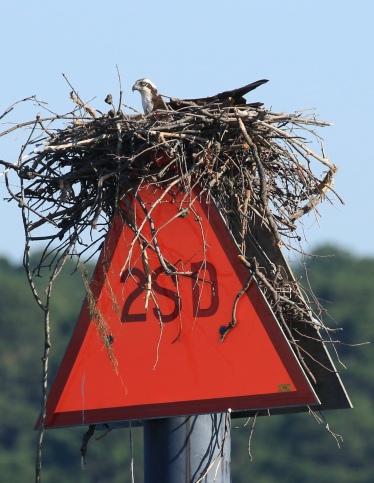 A birder has a subliminal urge to keep birding in some form, to fight the passage of time.  Older legs may no longer be able to scale the peaks to see the alpine birds, or endure the transoceanic flights to other continents.  Florida’s mangroves are under development pressure and the Chesapeake’s islands are disappearing.  The birds are adjusting and evolving, but the rate of change seems to be accelerating and some may not survive.  The time, tide, and birds wait for no man.  Good birding, while you can, and try out a kayak.