Blackbird singing in the dead of night

Take these broken wings and learn to fly

You were only waiting for this moment to arise

Blackbird singing in the dead of night

Take these sunken eyes and learn to see

You were only waiting for this moment to be free. 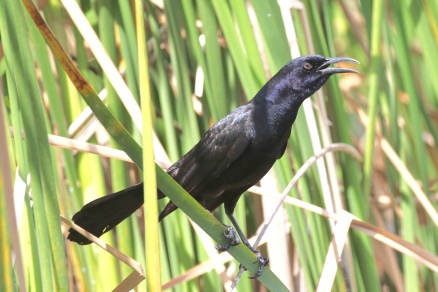 At first we thought it was just another Boat-tailed Grackle.  Common things are common, but we simultaneously called out “Ani” after getting a better look through the binoculars.  A little more in-depth birding identified it as the Smooth-billed Ani, not the rarer Groove-billed cousin.  All black bird with long tail and bizarre oversized bill with a small rhino hump on top.  The cat-like whining call nailed it down.  What we didn’t know at the time was that the sighting was the first eBird record of the bird at this hotspot.

The walk in Eagle Lakes Community Park in Naples, Florida was intended to be for exercise.  We had recently arrived from the frigid north and needed to attend to the extra layers of insulating fat acquired over the holidays.  Our spouses, true to the mission, took off at a power pace, but Andy and I got hung up counting coots at the gazebo.  At least I had left the camera home–Andy had not. 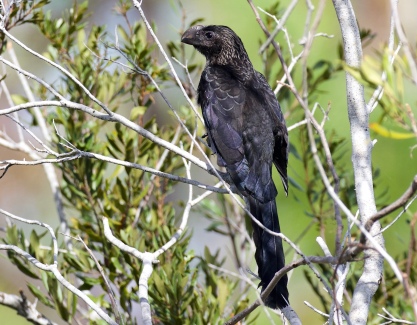 When will I learn?  Always bring the camera.  You never know when you’ll see something unusual, a new bird, a flight or feeding shot, etc.  I had only seen the Ani in Panama, and never in south Florida.  It is much more common in the West Indies and South America with a declining population in Florida.  Our theory is that recent Atlantic storms may have blown it in from the Bahamas.  In any case it was a great find and was posted on the eBird rarity alert for the county, triggering a lot of frenzied birders’ visitations to Eagle Lakes.

I don’t usually publish other birder’s pictures, but Andy graciously lent me these two to document the sighting, (he only took several hundred shots of the bird).  That’s another plus of digital photography.  When you have a good bird or pose, just start snapping away; check your settings after the first 10; readjust and keeping snapping.  Post-processing and deleting is done later at home.

Photographing a dark or back bird is not easy, and practically impossible if the subject is backlit.  Even with the sunlight behind the camera you’ll need to raise your exposure compensation settings several steps.  The goal is to resolve the subtle shades and textures of the dark feathers, even bringing out some of the irridescence often seen in the male grackles and starlings.

The wide range of bird feather coloration is caused by either of two factors:  pigmentation, or the microscopic structure of the feather, or a combination of both.  The three pigments of note are the carotenoids (giving vivid yellows and oranges), the melanins (giving black and browns), and porphyrins (resulting in a variety of pinks, browns and red).  In each case the resultant color is due  to the reflected wavelength, the other colors and wavelengths are absorbed by the pigment. 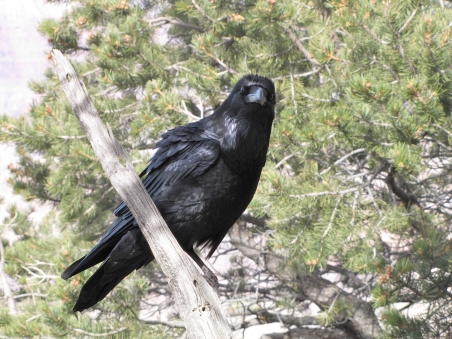 The other color-determining factor is the microscopic structure of the feather’s keratin proteins.  These layered proteins refract the incident light to varying degrees with our eyes perceiving the resultant composite wavelengths.

It’s interesting to note that there is no blue pigment.  The blue coloration of blue birds is entirely due to refraction.  The iridescent feathers seen in some birds, including many hummingbirds and some black birds, is also do to this refraction of light by the prism-like protein layers and the viewing angle of the observer.

Black birds are black primarily due to melanin pigments which absorb all the incident wavelengths of light.  White birds on the other hand reflect all wavelengths of the visible spectrum and absorb nothing.  It interesting to note that melanin pigments also add strength to the feathers.  This may well be why some of the white birds have black wingtips, edges, and other sites of wear and tear.  The White Ibis and Wood Stork are good examples of this.

When talking about black birds, especially the Corvids, the topic of bird intelligence invariably comes up.  Corvidae is a large family of blackbirds including crows, ravens, rooks, jackdaws, jays, and magpies, all known for their mental capacity. 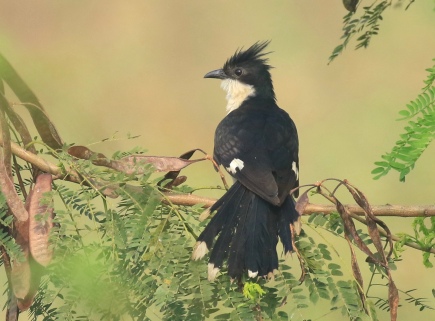 People who know and measure these things put Corvid intelligence right near the top of the animal kingdom, surpassed only by man and some other higher mammals.  Their brain-to-body mass ratio is similar to that of the Great Apes and whales, only surpassed by Homo sapiens.  Observation of their feeding habits, memorization skills, use of tools, problem solving, and organized group behavior all speak to this higher level of intelligence.

I’m not generally a paranoid person, but these days, whenever I hear a “black bird singing in the dead of night” I’ll wonder what he’s saying and what he’s thinking.  Is it just an innocent song of aspiration, or could he be hatching some nefarious plot?  While walking through the woods, if a cawing murder of crows passes overhead, I’ll keep an eye on them, just in case.  They’re smarter than you think.