For newbie Floridians or the uninitiated, the first sighting of a Roseate Spoonbill is a memorable event.  You might hear, “Look at that Pink Flamingo”, or from the more observant, “Look at that Pink Flamingo with that deformed flattened bill”.  A gentle correction is in order.  Our Spoonbill, the Roseate, is one of six in the genus “Platalea”.  These include the Eurasian, the African, the Black-faced from Eastern Asia, the Royal from Australia and New Zealand, and the Yellow-billed from SE Australia. 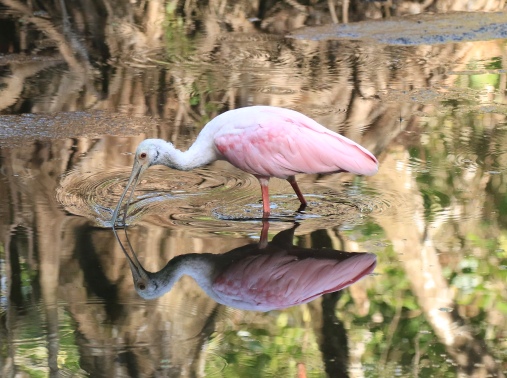 The Roseate Spoonbill is a year-round resident of Florida and the SE Gulf States of the U.S., but also found in the Caribbean, and in large areas of Central and South America.  These large striking waders are active feeders, usually found in shallow fresh or brackish water, swinging their submerged bills side-to-side.  Along with the color, it’s the peculiar spatula bill that catches your eye.  It is lined with sensitive sensory nerves that causes it to snap shut involuntarily when it detects the unfortunate fish or crustacean.  The chicks hatch with a straight bill; the spatula shape develops with maturation.

A “bowl” of Roseates at Ding Darling

Roseates were pursued close to extinction by the plume hunters of the early 20th century, but they survived and have made a comeback since.  They seem to be more numerous now, even compared to when I first started coming to Florida regularly, a dozen years ago.  A “bowl” of Spoonbills are often found feeding along the berm, close to our home and have given me many close-up photo ops–they’ve adapted to the morning parade of human walkers and gawkers near their feeding pools. 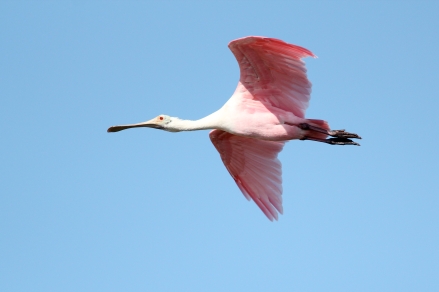 click on any photo to zoom to full screen

The pinkness of the bird is determined by the amount of carotenoids in the ingested crustaceans.  The juveniles are less pink and lack the more intense coloring seen at the shoulder in the adults.

It’s about time to say sayonara to Florida; our seasonal sojourn is drawing to a close and we are about ready to migrate northward with the other “snowbirds” and genuine aves.

Without breaking a sweat our Florida seasonal bird count has reached 97 this year, with a couple birding days still left.  These are primarily resident birds, as the spring migration seems less evident down here.  Oh, you do notice the newly arrived Swallowtail Kites soaring above and the occasional colorful warbler passing through, but for most they ask, “why leave”?  This is the land of sunshine, plentiful food, beaches, and swamps, where the living is easy, even for the birds.

But there are new adventures waiting up north along the Chesapeake.  I know the migrating Geese, Ducks, Swans, and likely the Loons will have left and the annoying non-migratory resident Canada Geese will have already built their nests at the shoreline.  Bald Eagles and Osprey will be far along their reproductive pathways and the Osprey will become the most boisterous voice, calling warnings from their nesting platforms.

The monotonic but rhythmic call of the White-throated Sparrow will no longer be heard, but the Mockingbirds, Red-winged Blackbirds, and Chipping Sparrows will have joined the chorus.  I’m looking forward to seeing the acrobatic Swallows, Swifts, and Martins, as well as the Kingbird staking out his territory in the back yard.  And I must quickly break out the Hummingbird feeders before these unique migrators pass me over and all settle in my friend Barbara’s yard–she keeps many more feeders than me, all filled and ready.  I believe she has the local “record” for the most Hummers seen simultaneously at her feeders.  Wasn’t it twelve, Barb?  Keep up the good work, but leave a few for me.